As it’s already known, Christmas are celebrated in behalf of anniversary of the birth of Jesus of Nazareth, who has an important role as a spiritual leader on teachings the basis of Christian religion.

Christmas it is considered as the most beautiful time of the year, which reminds you how to celebrate and enjoy every second of your life. Except the joy that brings in every family, this time of the year has it’s own traditions, which we can say that are the key that gathers all family members together.

Every country has its own traditions, and so makes these celebration more special. If we refer to Finland, there  it’s popular to go to saunas on Christmas eve, but in France some people burn a log at home from Christmas Eve to New Year’s Day. And in United States as well are several tradition which all of them have a story and a reason that they came to be.

From eggnog to finding coal in your stocking, here are the explanations behind some of the popular Christmas traditions we’ve come to know.

Kissing Under The Mistletoe 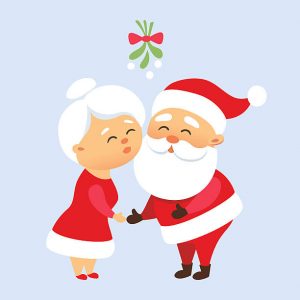 This tradition takes us back to thousands of years, to find the explanation, but we can tell that there are more than one.
The kissing part of the tradition likely started in England, where men could sneak a kiss from any woman standing under the mistletoe. Any refusal was considered bad luck. Another part of this tradition that seems to have been forgotten is that the kissers were supposed to take a berry from the mistletoe each time they kissed. Once the berries were gone, they had to stop. 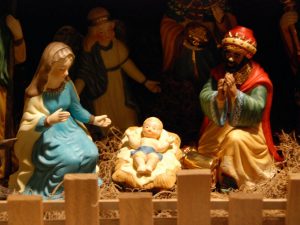 The nativity scene is used to show the story of baby Jesus, since even this celebration is based on his birthday  Dec. 25.

But what is really interesting is that the original living nativity was created by St. Francis of Assisi around 1224.  His aim was to help his followers understand better the birth of Jesus. Supposedly, St. Francis requested permission from Pope Honorious III to have a manger with hay and two real animals — an ox and a donkey. He put them in a cave in Grecio, a village in Italy. Villagers came to see what he was doing, while St. Francis preached about Jesus of Bethlehem.

Regardless the information, the details about St. Francis and his actions can’t really be confirmed. But in this case what we can say is that his living nativity scene had enormous appeal; and of course was a big help for his followers to get connected to Christianism and learn more about it. 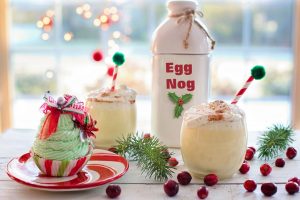 Eggnog is another  popular Christmas tradition, which also has a history all of its own, and whether you hate it or no, you need to practice this one. It’s a common holiday drink, made with raw eggs, milk, cream, sugar, and some kind of alcohol.

Its historical story shows us that this tradition began as a wintertime drink for the British aristocracy, this because they were able to afford ingredients and most important they were able to add expensive liquors to it to keep the eggnog from spoiling.

In the 18th century, eggnog became a drink everyone could enjoy, as U.S. colonists started making it with cheaper rum instead of brandy or wine.

An interesting story to tell is even the way how they named this drink. Rum used to be called grog and was often served in wooden mugs called noggins. So people started to call it egg-n-grog, and after a few years changed it to eggnog 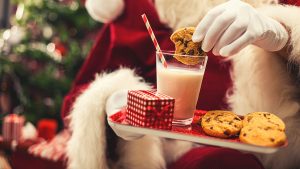 Even this tradition has not only one explanation but several ones. The oldest story goes back to ancient Norse mythology. The god Odin had an eight-legged horse named Sleipner. During the holiday season, kids would leave food out for Sleipner, hoping Odin would stop by their homes and leave gifts. To this day, this tradition exists in places like Denmark and the Netherlands, where the story goes that it’s horses that pull the sleigh, not reindeer. They leave carrots for the horses, who are undoubtedly exhausted.

This tradition was part of through years, but yet with another theory, where families would actually put the tasty snacks in stockings and hang them by the chimney and in this way they would add an welcome gift for jolly old St. Nick.

Leaving milk and cookies for Santa (and carrots for his reindeer) tradition became part of American tradition in the 1930s, just because parents wanted their children to know the importance of giving back and being thankful even in hard times. So to complete this “mission” they set out milk and cookies to show their gratitude. 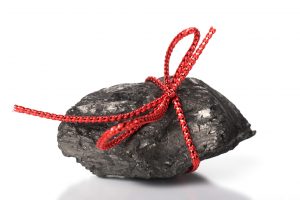 Leaving naughty kids coal we can say that is such a evil thing to do, even though includes only the naughty one, but we can also say that this is one of the oldest Christmas tradition. We cannot talk about the origin of this tradition but we can generally explain the story.

So according to its history Santa would come into people’s homes and leave presents either in stockings or in shoes left by the fireplace. In case that Santa happened to run into a kid who didn’t deserve a present, because of his/her attitude during the year , he likely reached into the fireplace and grabbed a lump of coal, which was the common method of burning in the 19th and 20th centuries. But the “punishment” in Christmas eve would not stop with the coal, but Santa might also leave twigs, bags of salt, garlic, and onions.