The Mystery secret of the Sea is now served in your table. We are talking about Edivo unique wine, which comes from the vineyards of the Croatian coast.

Centuries ago, the wine consumed by the Greek gods on their festivals was stored in amphorae, a ceramic vessel where the quality of the drink served to Zeus or Aphrodite kept all the ingredients, aromas and flavors fresh. The amphorae, after being filled with wine, were tied with a rope and placed at the bottom of the sea for hundreds of days…!

But this tradition hasn’t changed yet, and is well applied from Edivo Wines. The vineyards from where it comes from are located in a small village in Croatia called Drace.  Adriatic coast in Croatia is the beginning of this whole story. This is the Pelješac peninsula or let’s just calle it “The Wine Paradise.”

In Pelješac you can also find great wines, like Dingač or Plavac Mali, which are known all over the world. But what makes this wine so unique is because Pelješac is the gift of nature itself. There you will find the sea, the deep, crystal blue of the Adriatic that holds within treasures and mysteries, and that’s what Edivo itself is.

The wine settles in the amphorae and then dives into the depths of the sea where it is stored for about 700 days, giving it the name Navis Mysterium or Mystery of the Sea.

The grapes are harvested from the beautiful vineyards where Edivo varieties are produced, unique Croatian wines in amphora, known all over the world. One of them is Dingač, known as the king of Croatian wines.

It was 2011 the year Edivo made its first wine deciding to make it unique. Using the idea of ​​immersing bottles and amphorae in the sea, as they continued to constantly check their quality, the best specialists explored an opportunity, which after successful results, turned into a mission for the worldwide market. The first amphorae were submerged in late 2013 and early 2014 in several different locations around the Peljeshac peninsula.

After the reveal we have to say that the bottles had the attention of the consumers, but we cannot say the same for the amphorae, because the process itself is difficult. And that is the reason why they started to carefully investigate every step of this process, inserting the glass bottles inside the amphora so that the wine did not lose its quality. 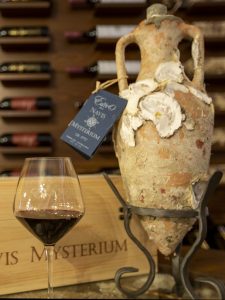 Initially they used a 0.75L glass bottle where was inserted into a clay amphora and insulated with an airtight stopper with rubber lining, which was submerged in the sea at a depth of 18-25 meters for more than 700 days. So yes, that was the moment when Edivo wine created its unique story which called: Navis Mysterium – Mystery of the Sea.

From that day until now Edivo has the first underwater winery, taking on concession an old sunken fishing boat, which was located on the seabed for more than 30 years where the bottles and amphorae were placed.

Each bottle of Edivo is unique, and it presents perfectly how can a product be made with love and devotion. 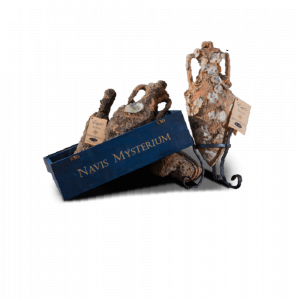