Have you ever imagined a colorful river?

It is called Caño Cristales and is located in an isolated city in Colombia.

Like many rivers the Caño Cristales flows through a bed of rock covered with green moss. But its uniqueness lies in its colors.

This river itself is a burst of colors! You read it well 😉

It is considered as such because within a very short period it takes on different colors, thanks to Macarenia Clavigera, which is a unique species of aquatic plant.

Specifically:
During the period September-November the river floor gets a bright red color

Its bright red color glows across the river as the plant climbs the black rocks underwater. 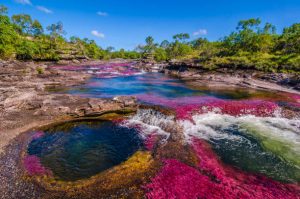 Along with the yellow sand, blue water and green mosses that grow on the rocks underwater, it’s hard to ignore the magnificent color spots that make Caño Cristales look spectacularly impressive

In June the river just starts its transformation with a soft palette like pink, but as the season passes in November, the colors gradually become more intense, making a nice contrast to the green background.